The Paula Rego documentary ‘Secrets and Stories’ (BBC 2) directed by her son Nick Willing, was never going to be the usual detached academic and clinical dissection of a painter and their work, and that is what made it so compelling. The relationship between director and subject quite naturally enabled a highly personal insight into the life of a notoriously shy painter. Willing places Rego at center stage, her meandering monologue acts as if a fascinating gift, painstakingly and delicately unwrapped.  What is revealed is exactly as the title suggests, the secrets and stories of a life at times bold and fragile, humorous and dark, loving and tragic, so often reflected in the complexities and often autobiographical narratives of Rego’s own paintings.

Not dwelling on the painter’s eventual international success, Willing focuses on the earlier years of Rego’s life, her childhood, her life at the Slade, her pregnancy, marriage, affairs and widowhood. This is not a film focused on fame, but about the interweaving relationships that create a human existence. Willing, acting as gentle inquisitor, engages the viewer by sharing his quest to illuminate a mother who was at times both secretive and distant. Each stage of Rego’s life is pondered on, the painter’s, at times, wistful recollections accompanied on a chronological journey by relevant artworks, personal snapshots and home movies. All, in turn, not only permit the viewer to establish connections between the painter and her work, but to unravel who Paula Rego actually is.

That unraveling inevitably reveals Rego’s experiences in life and in art as shaped by her womanhood. Rego describes a repressive, middle class Portuguese life as one in which women were highly encouraged to do nothing, while working class women were forced to do everything. The painter recalls girlhood as a time of learning obedience to men, in addition to secretive and confused messages about puberty, sexual abstention and female middle class propriety.  Subsequently, after leaving 1950’s, then fascist Portugal (described by her father as a ‘killer society for women’), to attend London’s Slade School of Fine Art, Rego recollects an era including coerced sex leading to many secretive back street abortions. Her affair with highly regarded and married painter Victor Willing proved life changing as she was forced to leave for Portugal when pregnant and deserted by the male artist, who she eventually married. 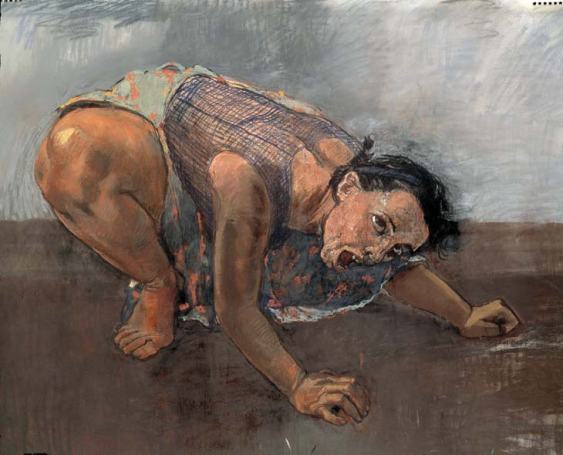 Speaking candidly to her son, Rego recalls her marriage as a complex mixture of artistic support, love, unfaithfulness, secrets and fear of abandonment, later further complicated by Willing’s debilitating health problems.  The documentary includes recollections of the painter’s two daughters whose anecdotes, despite their obvious respect and admiration, reflected their feelings of distance from a mother preoccupied with her work (a circumstance rarely negatively associated with Picasso or Lucian Freud for example). The artist herself commented on her own inability to provide absolute caring attention for her children and husband, an expectation of duty for many woman and one which often prevents career success.

Rego highlights her use of art as therapy, after lifelong anxiety and depression, a history she shares with her father. In her paintings, for example, her father becomes a comatose figure and incapacitated Victor is depicted as a dog to be treated with a cruel kindness. In artworks, Rego calmly states, you can ‘let all your rage out’, her coping mechanism. Despite her anxieties however, Rego’s strength, determination and own experiences are  exemplified in her ‘Abortion’ series highlighting the horrors of unsafe abortion after the failure of the 1998 referendum to legalise abortion in Portugal. Rego recalls the whispered secrets of women in the gallery while looking at her paintings. In turn, after being shown in Lisbon, her work actually helped change both public opinion and the law in 2007.

Somewhat eccentric, steely, shy and charming, Rego, the gift, is slowly revealed. The  scratchy super 8 films of the younger artist’s hedonistic pleasures, dancing with Victor and friends, interspersed with the almost silent concentration of footage of present day older Rego still in the studio, reflect a women’s lifetime of experience and creativity.

‘Secrets and Stories’ is both a sensitive and honest conversation between mother and son, and also artist and viewer, that should not be missed. 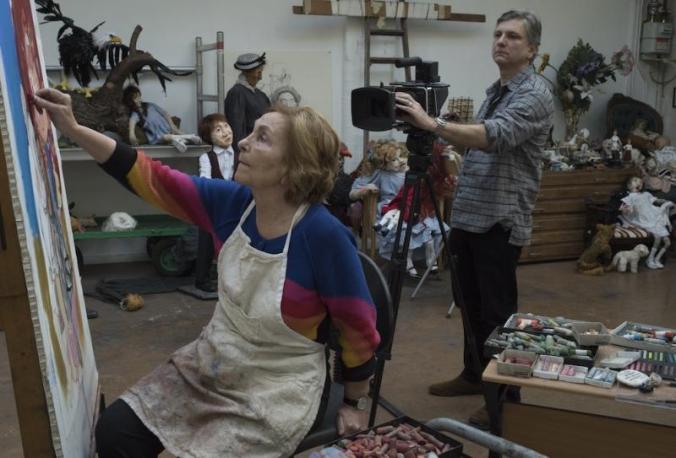 Available to watch in the UK for a limited time:

Hengameh Golestan (b.1952) is a pioneer among Iranian women photographers. Born in Tehran, she has travelled extensively, documenting the lives of women in both Iran and Kurdistan. Being a woman has enabled her to gain access to intimate domestic settings, as well as the rituals, work and practices of her fellow females’ lives.

Hengameh’s work is also politically motivated. In 1991, for example, she assisted her husband on the project `Recording the Truth`, a film which examined the role of censorship in Iran.

Perhaps Hengameh’s most captivating photographic work, however, documented the public responses of women in Iran in the aftermath of the exile of the Shah and the rise of Ayatollah Khomeini’s Islamic Republic. 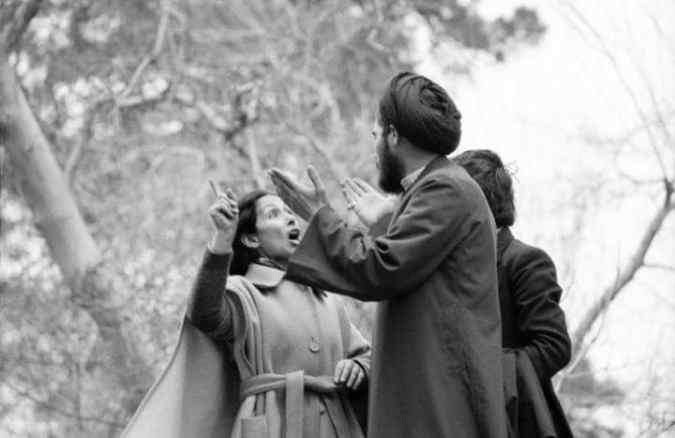 During the spring of 1979 more than 100,000 women began to gather on the streets of the capital. This huge upsurge of female unrest was in protest against the compulsory hijab ruling which was sanctioned by the new Islamic government. Women, who had previously been allowed to dress as they wished, were now being forced by the state to wear a headscarf at all times in public spaces. This was not only an issue of enforced dress codes, but for many was indicative of the dismissal of women’s human rights. 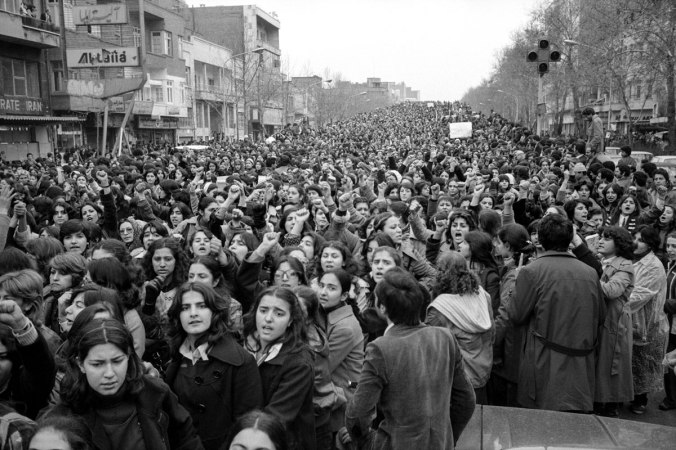 Hengameh, who was 27 at the time, documented this huge women’s protest, focusing on the scale, determination and bravery involved in such an uprising. The women protesters originated from all quarters of society, including nurses, artists, doctors, teachers, lawyers and domestic workers. The photographer spoke of the charged political atmosphere of the time, in which excitement and fear were never far away. Hengameh recalled documenting the protest, noting the difficulties of photographing such a huge crowd while also hiding from government officials. Nevertheless, Hengameh’s black and white imagery perfectly captures the vibrant resistance and intensity of the day. 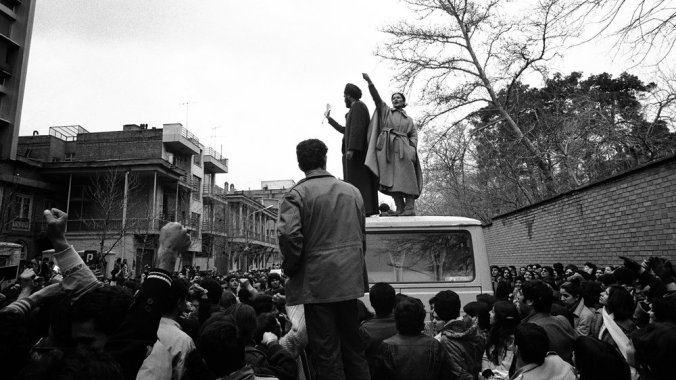 The photographer’s work was only publicly exhibited in recent years and in London, long after Hengameh’s exile to Britain in 1984. Hengameh, in the meantime, has continued to work as a photojournalist.

The protest ended in violence for many women, some were even attacked and killed. It was also over without the freedoms so many had been inspired to demand. The photographs captured by Hengameh not only document the protest, but also the last day women could walk the streets uncovered, and the beginning of an ongoing era of hugely repressed human rights for the women of Iran.

Hengameh’s photography, however, captures a unique moment in Iranian history, reflecting the strength and resilience of Iranian women, while raising concerns about the fragility of all gained female human rights and ongoing subjugation of women throughout the world.

Hilma af Klint (1862-1944) grew up in idyllic rural Sweden and it is considered that nature, in addition to a keen interest in mathematics, was a crucial influence on her later paintings. The sudden death of her sister also impacted Hilma’s preoccupation with spirituality, another element associated with the artist’s body of work.

Hilma’s talent for visual art soon became clear and she was able to enroll in Stockholm’s Royal Academy of Fine Arts (1882), an educational opportunity which women in many European countries were still denied.  At first Hilma concentrated on landscapes and portraiture for her studies. However she had already developed an interest in theosophy, a mystical philosophy concerning the mysteries of life and nature.  Significantly this was a semi-religious and philosophical movement that did not discriminate against women and was in fact founded by a woman, Helena Petrovna Blavatsky.

The ideas and beliefs incorporated within this movement were simultaneously inspiring male abstract pioneers such as Mondrian, Malevich and Kandinsky and would have a profound influence over the work of these artists, and also Hilma’s too.

Hilma became involved with a group of fellow female artist known as ‘The Five’ who shared her interest in mysticism.  Together they worked on an artistic philosophy which centered on knowledge deemed beyond the senses, focusing on spirituality.  In 1896, Hilma began a series of ‘automatic drawings’ believed to be driven by forces beyond the natural and human world. Such work encompassed much of the geometric symbolism that the artist would later refer to.  Hilma later gained employment as a draughtswoman, another aspect of her life that would be reflected in her ensuing pioneering artwork. 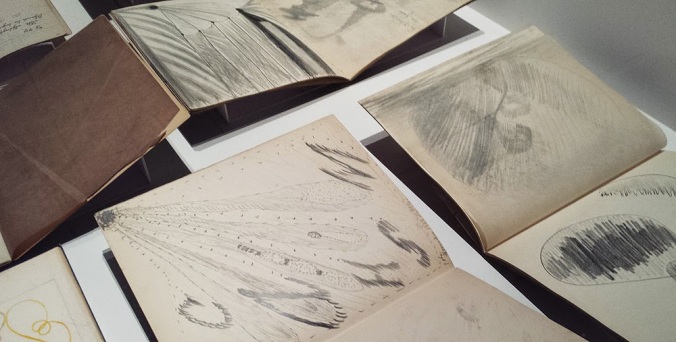 In 1906, Hilma began creating abstract paintings in a series entitled ‘Primordial Chaos’. From this point onward Hilma produced a body of work encompassing and exploring the ideas of her day, from scientific discoveries of electromagnetic fields to musical oscillations, from prisms of light to the occult. The artist still studied the theosophical texts, drawing on a wealth of ideas which she translated into a visual philosophy aiming to depict a higher world beyond the everyday. Hilma created a large and pioneering body of work that incorporated a complex and new artistic language, within a movement that would be regarded as changing  Western art forever.

Hilma’s ability to create as a woman artist was shaped by certain circumstances. The first is that she was from a fairly well off family which enabled her to pursue her artistic goals. The second is that she was allowed an art education, unlike so many other women artists who were systematically denied access to academies and art schools. Thirdly, Hilma was involved with a female-friendly philosophical stance, which enabled her to deeply explore particular theories, from which otherwise she may have been excluded. Fourthly, the artist was able to develop her ideas within a group of fellow women artists. Even if female artists could access art schools, they were seldom included in less formal groupings of artists there, unlike men who often formed ‘boys clubs’, such as the Pre-Raphaelites for example,  in which they could support each other to cement their artistic practices and goals.

Hilma died in 1944, without ever showing her work in an exhibition. In turn, her hugely pioneering artistic achievements have never been properly recognised. The role of abstraction in Western art history is never the less, one of incredible significance. Hilma’s work is now believed to predate the work of Kandinsky, an artist usually credited with the introduction of abstract art. However, even today the work of Hilma is seldom referenced in the same breath as the innovative male abstract artists of the era.